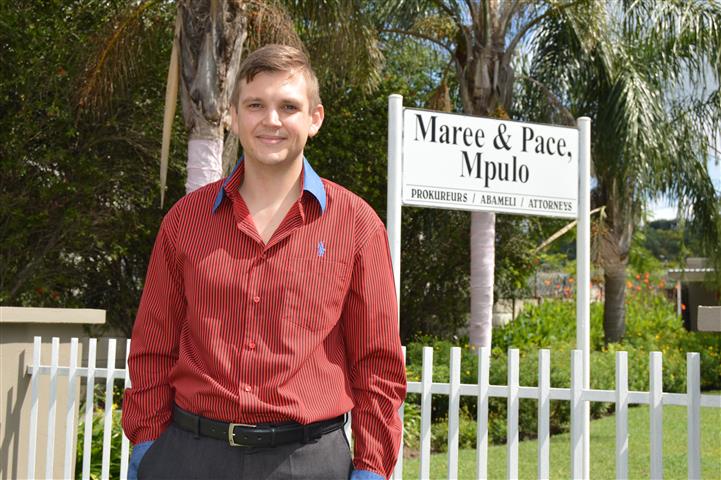 Maree & Pace, Mpulo is pleased to announce that Mr Justin Herbert Pitout has recently joined the firm as head of the Civil and Criminal Litigation Department.

Justin will be appointed as a Director of the firm from April 1, 2017.

Justin is an admitted Attorney and Conveyancer of the High Court of South Africa and has practiced as such for some years now.

He is a well-known and respected legal practitioner in Ladysmith and surrounding areas.

Justin was born and raised in Ladysmith, a previous pupil at Egerton Primary School and Ladysmith High School, where he received his Senior Certificate in 2004 with distinction.

Justin furthered his tertiary education at the University of the Free State and University of KwaZulu-Natal (Howard College) respectively. In 2009, Justin was awarded his Bachelor of Laws (LLB) Degree and in 2010, the Master of Laws (LLM) Degree. While completing his studies, Justin received Golden Key Honour Society Membership for academic excellence and was placed among the top 15% of students at the university.

In 2011, Justin was appointed as a Candidate Attorney and served his two years of articles.

In March 2013, he was admitted as an Attorney of the High Court.

In May 2015, Justin wrote the conveyancing examination and was one of only four candidates in KwaZulu-Natal (out of 87) to pass the six-hour written examination, with Justin obtaining the second highest mark in the province.

Justin has also been approached by Rhodes University (Grahamstown) to be appointed as an external examiner to monitor and assess the academic quality of research papers.

Justin has dedicated the last 13 years of his life to the field of law, and is very humbled and honoured to be a part of the firm Maree & Pace, Mpulo and to be given the opportunity to fulfil the role of the late Mr Louw, who was a very reputable attorney during his tenure at the firm.

A few words by the current Directors, Danie du Preez and Gail Green:

Justin has steadily gained a reputation in Ladysmith for being passionate about the law, tenacious, hardworking and dedicated to his clients.

In the light thereof, we are extremely happy that Mr Pitout has decided to join us and add valuable skills to the firm.

Maree and Pace, Mpulo is, to our mind, a firm that evolves with the times and remains at the forefront of the practice of law.

With the appointment of Justin, it is a declaration to our clients that we care for the continuity of our firm that was established by Mr JW Maree in 1966, who was later joined by Mr Robert Pace in 1969.

Our vision is that Maree & Pace, Mpulo must not only continue to provide the current Ladysmith community with sound legal advice, but also to provide legal services to future Ladysmith generations to come in our fields of practice, namely criminal and civil litigation (divorces, maintenance, debt collection, property transfers and bond registrations as we are on the panel of the four major banks), administration of deceased estates, wills, estate planning and commercial law such as drafting of contracts and contractual disputes.

We congratulate Justin for his achievements and warmly welcome him to Maree & Pace, Mpulo.